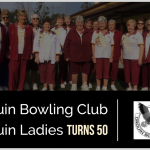 There was more than one reason for fireworks on Guy Fawkes Night at Drouin in 1951. While district families gathered around huge bonfires for the annual ritual of letting off crackers, rockets and Catherine wheels, 15 women were quietly making history at the Bowling Club.

After more than ten years of supporting their men folk from the sidelines, the ladies were firing up to take their first bold step on to the turf as Associate Members. A decade earlier the men had battled weeds and wind as they built a four-rink green in Drouin’s main street. Wives had been called upon to provide refreshments for their men – bringing their own food, cutlery, crockery and glassware – but could not set foot on the green.

Then, in 1951 at Drouin Bowling Club’s Annual Meeting, the Committee was instructed 􀂨 “to examine the possibility of Lady Members and proceed if it was considered advisable”. Two months later Mr White moved a motion “to admit the (female) Associates” – this was seconded by Mr Housden.

As in bowls, the issue did not run straight down the line, with a small degree of bias against the change. Mr Porter tried to defer the Ladies admittance till the following season but at the end of the day there was considerably more weight in the “for” argument and his motion lapsed without a seconder.

The Club’s “Brief History”, written in 1962, suggests the men made the right decision. “After 10 years of exclusive possession, the men made way to allow the gentler sex to participate. Despite the dire forebodings of some, the Club continued to progress and develop,” it says.

Once in the Club, women had to play within the rules – those of the Bowling world and those set by the Male Committee. Conditions included -No mixed play- “Except on one night per week if so arranged”. Women were allowed to have two afternoons play each week, but not Saturday or Sunday and were NOT allowed to play after 4pm. (Did the men fear late play would cut into important meal preparation time at home?)

Requests for extensions or further concessions had “to be submitted to the Secretary”. The women had to make their own arrangements for rolling the green and to have at least 20 members. And, in a move. that would be outlawed today, the Club gave preference to “wives and relatives of Club Members”.

The women decided on Tuesdays and Thursdays for play and to meet on Mondays. They paid subscriptions on one pound one shilling in 1951-52, much less than the $ 100 fee of 200l. Competition entrance fees, too, have risen from 2/- in the first few years to the current level of $4. Of course, if you played on a Thursday in: 1952, you paid only 1/- with no trophy provided if less than 16 players fumed up. There was no chance of impressing female peers with fancy cakes at a Thursday afternoon tea, which consisted of ‘tea and biscuits• at a cost of 6d.

Tea leaves became a bone of contention in 1953, with complaints received about them being ‘left in the pot’. Notices were pasted requesting ‘the teapot to be emptied after use’.

In 1953 membership stood at 40 and fundraising activities included a Picture Night of Mr Grey’s overseas trip. This cost 2/-, was held in the Fire Brigade hall and involved Associates bringing ‘a basket’ – presumably of food. Other fundraising in the early years included Crazy Whist at member’s homes. Th􀂚 women raised 170 pounds in 1954-55.

Hotel, with each member in a losing side paying for two dinners. Wind-up nights were also held. there. Women provided afternoon tea for the men, boiling the water in a copper. The tea towels were hung on bushes to dry. Everyone used ‘outside toilets’ at this time.

The catering facilities improved over the years. In the early 1940′ s the Clubhouse, which had been moved to the green, provided shelter from the rain but little more. In 1950, just before the women joined, the men added 15 feet to the original building, with another doubling of size in 1957. The building then measured 31 ft by 27ft. This 1957 extension included a kitchen and inside toilets and meant that the Bowling Club finally had its own cutlery, crockery and glassware to use for catering.

There were strict dress codes on and off the green. In the early days women had to wear hems no more than 13 inches above the ground. This climbed to 15 inches in later years. They even had to dress in uniform while working in the kitchen – wearing long sleeved white dresses, with white stockings and bobby socks. Today the accepted bowls uniform has been modified to include slacks, shorts and culottes with navy cardigans and jackets and also navy slack suits. the 1960’s saw the opening of the new 65ft by 26ft Clubhouse. The first Ladies Pennant was won in 1974-75 season in Division Three. Team members were: Vera Oldham, Bonnie Hobson, Peg Monk, Ester Butterworth; Dulcie Kelly, Ena Sheffield, Bess Myer, Milly Kelly, Ilma Steer, Jean Cheetham, Vi Pascoe, and Ivy Anderson. There were 82 lady members in 1976 membership peaking at 117 in 1985 (Subs. were then $30). In 2001-2002 season we have 58 lady members.

In 1982 the fundraising drive intensified when Kath Marshall, Jean Cheetham and Vi Pascoe began general catering for the Club. Over the next 5 years this Committee and their workers’ efforts at birthdays, weddings and anniversaries raised an impressive $65.000.

In 1997 S.J. & R Hedley built a new floor in the Clubhouse which allowed for more catering. Today’s 30 metre by 14 metre building features a bar, workable kitchen and catering room. It seated 200, has new curtains bought by the Social Committee and heating and air conditioning. There are also two electric drink fountains by the greens. Another achievement was the ‘Golden Oldies’ cookbook put out in 2000, which featured plenty of old-fashioned home cooking, recipes from members.

Oldest playing members are Milly Kelly- 86, Jane Livingstone – 86, Life Member (our Treasurer since 1977) Peg Monk – 85. Life Member Vi Pascoe – 81 is still active in catering. Jessie Osborne – 94 and Ilma Steer – 91 are some who still take an interest in the activities of the· Club.